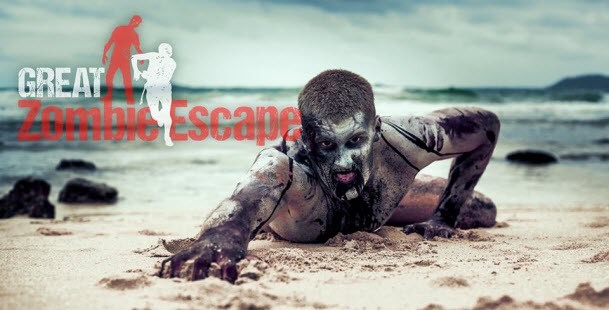 Have you ever wondered if you and your friends would escape the zombie apocalypse? Well now you have a chance to find out at The Great Zombie Escape, an annual sell out event in regional central Queensland.

Ticketebo spoke to Nathan O’Connor, Founder and Event Director of The Great Zombie Escape. He shared with us what he’s learnt since running his first event, his passion for keeping things local and how to spot a great event opportunity.

“Everyone loves to be chased, that’s why it works.” Nathan laughs as he explains to us the reason why his annual event, The Great Zombie Escape, is a sell out. “All participants giggle and scream – everyone has the same reaction, I just thought I would play on that. That’s why we chose the rainforest as the location for our first Zombie run, it’s a pretty scary place”.

The main driving force behind Nathan’s decision to run a Zombie run was the simple fact that it had never been done successfully in Central Queensland.  Nathan explains, “I saw lots of people travelling out of the region to go to these events, and spending a lot of money to do so. I just thought, why not bring a great event like this to them?” In addition to bringing the event closer to home, Nathan also saw the opportunity to create a run without all the intense obstacles similar events make participants endure. “It made sense to me to create an event that anyone with an average level of fitness could get involved with – don’t just follow the beaten path”

Although running successful events wasn’t always part of Nathan’s career plan. “I studied a BA (Hons) in Performing Arts at Central Queensland University, I was supposed to be the bad guy in films”, he tells us laughing. Today he is the event organiser behind several successful events, like The Yeppoon Chilli Festival, various fight nights, and popular mixed martial arts tournaments. On top of this, he also runs two of the largest martial arts clubs in Queensland and he’s a dad of two - so it’s fair to say this he has his hands full.

Nathan is honest about his experience of starting out fresh in the world of events,“Of course I made mistakes when I started out – everyone does, but I very quickly learnt from them.” We asked him to share with us some of the key things he’s learnt over the past couple of years and straight away he passionately talks about the importance of making sure you shop around for suppliers and venues to get the right price. “You must speak with other event managers in your local area, get to know what they are paying for the same things.  Don’t be afraid to tell a venue or supplier what you’ve been offered from their competitors.”

Working with a reliable online ticketing provider has also been a key lesson that Nathan was keen to share with us. “I’ve had some bad experiences in the past and I have to say it makes such a difference to the event. Honestly, working with Ticketebo was the driving force behind the success of the Zombie run at the start.” He goes on to explain, “it’s not just about the online event registration software, it’s also about the quality of service you receive from the team. Their industry knowledge of running events and managing the online ticketing for events like mine really helped”. Nathan is open about the fact that if he had been solely responsible for the ticketing structure his event would have been a crashing mess, “Ticketebo gave me great advice on how to separate my event tickets into different tiers – that’s the invaluable experience you really need.”

So what’s next for Nathan - event organiser, martial arts master and Zombie coordinator extraordinaire? “I have recently handed over the Chilli Festival in Yeppoon to a great local charity, they will take over the running of it now. I’m planning a BBQ and Beer festival – celebrating all things great about the Aussie BBQ.” He’d love to see the Great Zombie Run travel around Australia, but says his job as a Dad and his other commitments means his card is too full right now.

For now he’ll continue hosting new and existing great regional events, making them affordable while raising money for local charities he’s passionate about, “that’s my formula I guess, and it’s one that seems to work”. We couldn’t agree more – bring on the BBQ and Beers this summer.

If you want to find out more about Nathan’s next events visit his Facebook events page here.